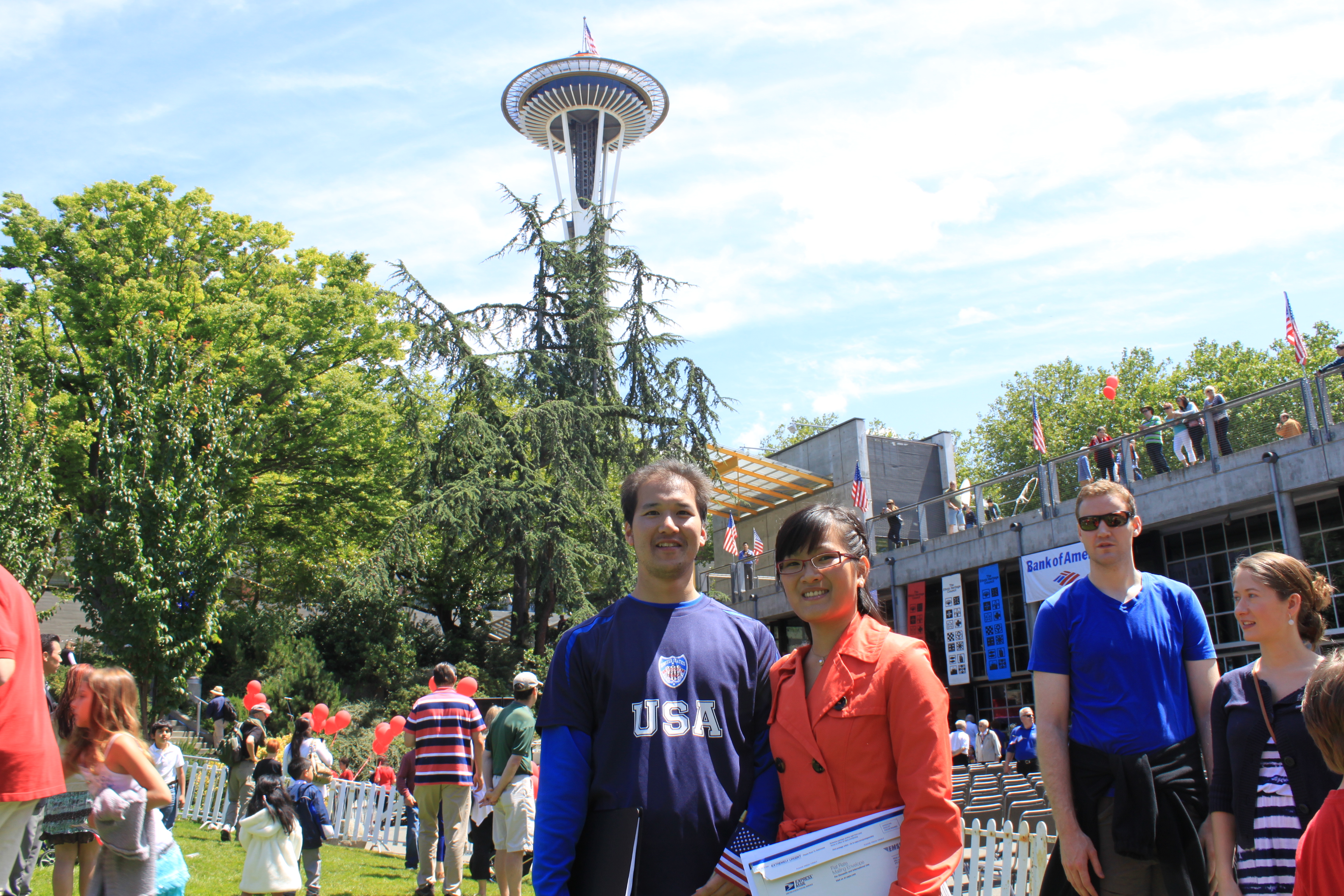 SEATTLE, WA — Like the ongoing controversy over deportation laws, the path to citizenship has also been spotlighted by recent political action on the federal level. An executive order by the Obama administration that went into effect last month has allowed undocumented immigrants meeting certain requirements (including being brought to the United States as children and having completed high school or military service) to obtain driver’s licenses and work permits, though not granting them full legal status. In fact, a notable converse to the grimness of deportation can be found in the stories of those who have become the newest members of American society.

In the shadow of Seattle’s Space Needle this past Independence Day, more than 500 people from over 80 countries were sworn in as United States citizens. The 28th Annual Naturalization Ceremony, hosted by local non-profit Ethnic Heritage Council, drew hundreds more in family, friends, and spectators, being one of the more prominent ceremonies in the Pacific Northwest.

The master of ceremonies was none other than Mayor Mike McGinn of Seattle, who was preceded by the Greenwood Concert Band, Total Experience Gospel Choir, and the Choir of Sound, all of which entertained the waiting crowd.

Other high profile politicians were at hand for appearances as well, including Washington Secretary of State Sam Reed, who was lauded for his work by Mayor McGinn. State attorney general Rob McKenna, a gubernatorial candidate, spoke of his Irish roots and the immigrant experience his own family also had several generations ago. U.S. Senator Maria Cantwell took the opportunity to commend President Obama’s announcement of the executive order giving some immigrants a two-year, renewable reprieve from deportation. The new policy could affect an estimated 1.7 million people.

“It was a long process but I’m glad we’ve made it,” proclaimed Sorin Say, who was in attendance to celebrate the swearing in of his wife, Sunheang Bun. Say, who grew up in the Rainier Vista neighborhood of Seattle, and Bun, who hails from Kampot, wed in 2007 in Cambodia. “It was a big wedding, I think about 500 family and friends. It was long, about two days’ worth of ceremonies.” In 2009, Sunheang Bun arrived stateside to be with her beloved husband.

U.S. Congressman Jim McDermott was also in attendance to present the “Spirit of Liberty Award” to Simon Khin, an ethnic Karen from Myanmar. Each year, the Ethnic Heritage Council honors a “naturalized citizen who has made outstanding contribution to his or her adopted country, the U.S.A., while maintaining his or her ethnic heritage.” During his acceptance speech, Khin commended fellow compatriot Aung San Suu Kyi and her work for the Burmese people. He pleaded for Americans to help in bringing democracy to Myanmar.

During the ceremony, Mayor Mike McGinn announced each country of origin, asking candidates to stand when called. Mexico came in third place with India as the runner up. The crown belonged to the Philippines, which had over 60 candidates present. Cambodia came in at eight candidates. Such moments are reminders of the hopeful side in immigration policy, whereby some are able to truly call themselves Americans for the first time in their lives.

Following the oath, the ceremony concluded with boisterous approval from the crowd, with each candidate filing in line to receive his or her certificate of naturalization and a chance to be photographed in front of a gigantic flag. When asked if she wanted a picture in front of the flag for a keepsake, Sunheang Bun, finally a citizen after the four-hour ceremony under a hot sun, responded, “I’m too tired.” Nevertheless, she is sure look back proudly on the day and celebrate its significance for years to come. 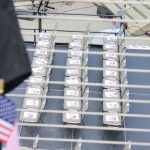 Pamphlets and chairs ready for the candidates to be sworn in. Bunthay Cheam, © 2012. 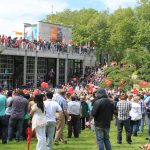 Friends and family members wait for the ceremony to begin. Bunthay Cheam, © 2012. 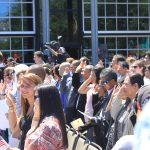 A group of Cambodians in a middle row raise their hands for the oath. Bunthay Cheam, © 2012. 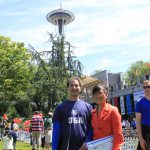 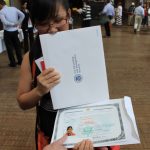 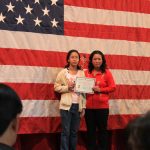 Two women pose in front of a flag in the armory (formerly the Center House). Bunthay Cheam, © 2012. 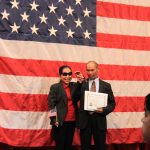 A light-hearted moment for one Cambodian couple. Bunthay Cheam, © 2012.