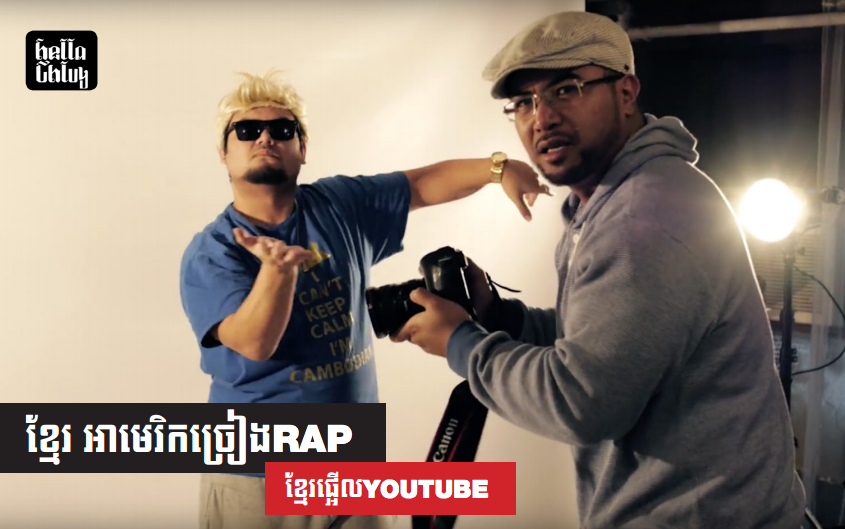 The original interview was published in Khmer in Sabay Magazine for the November 2015 issue.

Please introduce yourself. Age? Occupation?
My name is Phanit Duong and I am 32-years-old. I have been working in the real estate industry for over 5 years in New York City. I grew up in the Pacific Northwest in a small town 2 hours south of Seattle called Kelso, Washington.

How you decide to do your kind of music nowadays?
I have been making music for twenty years now. I first started recording on my mom’s karaoke machine back when cassette singles were a thing. I would take the B-side instrumental and record my own lyrics over it. It was around 1995. I was young and new to writing and recording so I wasn’t very good at all. I was a very offbeat rapper, it took years and years of practice and working on my craft to get to the skill level I am now. The first rap song that made me want to be become a rapper was Bone Thugs N Harmony’s “Thuggish Ruggish Bone.” It was nothing I ever heard before, so from that point on I knew I wanted to rap and make music like that. As years passed, I started developing my own sound and worked with producers who are childhood friends who shared the same passion in music. I started making my own original hip hop/r&b/pop music under the alias, “Memo Jackson.” My most popular song was “Dime” recorded in 2010. It had the most views on MySpace back when MySpace was the cool thing to do.

Exponential growth in traffic and fan base developed more recently when I decided to experiment with comedic lyrics and do parodies in 2011 under a new stage name, “Hella Chluy.” My first parody was over Lil Wayne’s “How to Love” instrumental. It was titled, “Hella Chluy” and currently has over 250,000 views on YouTube. The parody that got the world buzzing was “Sra Tnam Style” (Psy – Gangnam Style Parody) which rose to 221K views and “Boypren” (Justin Bieber – Boyfriend) with 304K views, my most viewed parody video yet. I have several other parodies that are fan favorites too such as Main Chick, Last Christmas, Goan Uy Goan Uy, and Started From the Bottom. My Chluy Films YouTube channel is now at 2.4 million total views and growing.

How was your childhood? All the song was inspire from your real life?
My childhood was rough. As a second generation Khmer American (or “Khmerican”), my parents came to America via Seattle with little to nothing. My parents were strict; who only wanted nothing best for their children. I was pretty straight edge, never got into trouble. Growing up I had health issues that really took a toll on my body. I was in and out of the hospital with chronic asthma so I missed a lot of school because of that. I was also doing Taekwondo at high level but this helped me overcome the struggles of having asthma. I was in the best shape of my life at age 17. I would go to every Taekwondo tournament and win taking home first place trophies in all categories. To be honest, Taekwondo was really my first love, music was always secondary. Then as I grew older, I made the full switch to music and kind of just stopped working out and stopped going to Taekwondo class. Tuition got expensive and my parents were struggling so it just didn’t work out financially but there will always be the “martial artist” in me. That is just something you can never forget. Once it’s in you, it’s in you forever. Luckily, I never had to use it on anyone (yet lol).

Was all the song refer to someone?
Not necessarily. Most songs I’ve completed are concept tracks or just plain comedy and fun. I don’t over think too much when I write. I just go where the music takes me and people usually love what they hear and see.

Who help you to do the music video?
A talented friend of mine that goes by the name of Planetary P. His real name is Jeff Lek, also a music artist based out of the Philadelphia area. He is good at what he does and we’re really close so I consider him like a brother. We’re both in this together. We’re a team.

What is the message you would like to send to people in the music video?
The message varies based on the video. In the track, “Goan Uy Goan Uy,” I speak to the youth about staying in school and taking care of their parents when they grow older. You can tell which videos is pure comedy where I just make it funny and relatable so everyone can laugh. And there are some with a positive message and some that are personal such as the track, “Started from the Bottom.” The lyrics there are real facts about my family growing up picking berries to survive and make a living. And of course there are songs that are romantic comedies. I love singing even though I might not have the greatest voice in the world. I write, record, mix, and master my own music so I have full control from start to finish. Aside from parodies and comedy skits, I do write and produce original Hella Chluy music. I have no release date for the project because I am taking my time to make sure it’s the best EP I can put out for the world to enjoy.

What is your plan target in music for future?
My plan is to keep having fun, work hard at my craft and continue to make people laugh. The game changes so fast that simply releasing an audio is not really effective any more. I will continue to produce music videos to accompany these tracks. I believe that my style of music and comedy is unique. It is relatable and accessible to multiple generations and across racial lines. Because music transcends borders, I would like to someday tour abroad in Khmer diaspora communities in France, Australia and England. Performing in Cambodia would also be a dream. I won’t stop making music until I can’t breathe anymore.