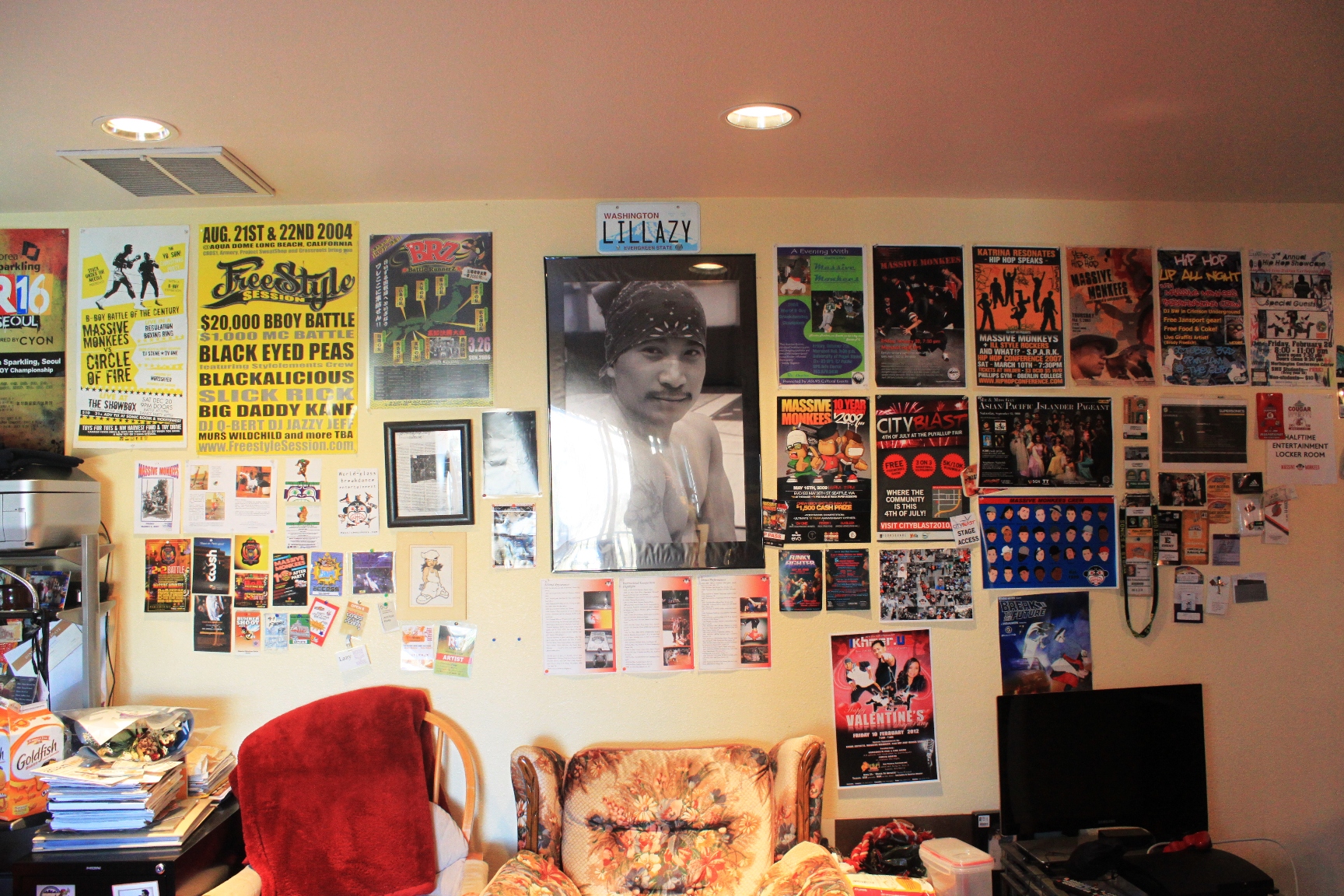 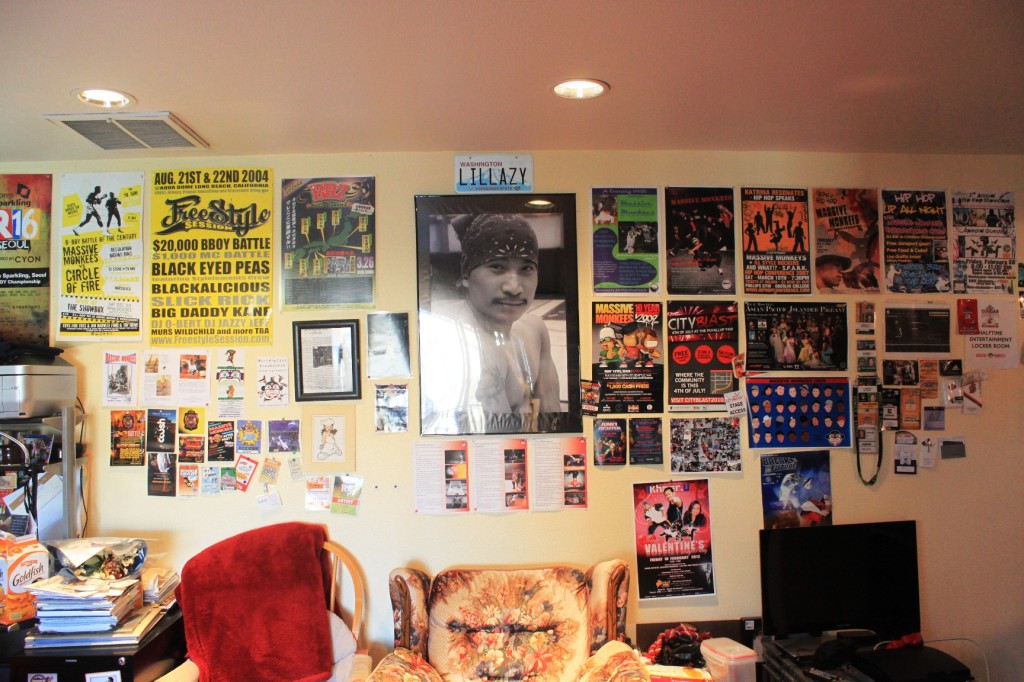 Ly’s collection of event posters and photos showcasing the many travels over the years. © Bunthay Cheam

SEATTLE, WA — From its inception in the 1970s to its worldwide appeal in the present, breakdancing or “b-boying” has transcended boundaries: politics and geography, ethnicity, language, and even seeming to defy the laws of space and gravity. Seattle is home to the Massive Monkees, a world-famous breakdancing collective of over a dozen and half members, including Samnith Ly, also known as Lil Lazy.

Khmerican: What got you interested in b-boying and when did you start?

Lil Lazy: “I think I was in the fourth grade, about eight or nine years old. At school, a friend named Jeff introduced me to breakdancing. I didn’t have much to do since all of my childhood friends were living in Seattle and we didn’t have video games, so I started breaking at home. I got ahold of the movie “Beat Street” and watched it over and over and tried to copy the moves. I would collect cardboard boxes and tape them together and practiced in our basement.”

Khmerican: When did things start to pick up with regard to b-boying?

Lil Lazy: “I was going to Meany Middle School and there was an after-school program where I met other breakdancers. One of the spots I used to practice at was the Union Gospel Mission. At the UGM, there was a counselor, Tim Scott, who created a breakdancing crew called Showcase. I started dancing with them, and I was battled in. Showcase was my first b-boy crew. That is where it all started and where everything popped off.”

Khmerican: Tell us more about how you got named “Lil Lazy.”

Lil Lazy: “I entered a battle at the Boys and Girls club in Bellevue, which was my second one. During the battle, I did a flare 90, a move not many people could do. When I did the move, everybody flipped out and was like, ‘WOW!'”

“After the battle, Lazy, a b-boy from the crew Boss came up to me and asked me if I was Cambodian. I told him yes and he asked me to be ‘Lil Lazy.’ He said that I reminded him of himself when he first started breaking because of the Nike Cortez and being Cambodian. Ever since that day, the name stuck with me. We started practicing together, and we built a bond.”

“Eventually, Lazy got out of Boss crew, and he started another crew called Mad Flava. I eventually got out of Showcase and got into Mad Flava, which lasted a couple months.  During the time, I was also breaking with a couple other guys, Juse and Domes Diggler, and we decided to create a crew called Massive. We started breaking with other people including USM [Untouchable Style Monkees]. In 1999, we came together and became Massive Monkees.”

The Massive Monkees are a world-renowned breakdancing crew. In 2004, they took home first place in the World B-Boy Championships in London. Since then, the crew has performed with the backing of corporate titans such as BIC and Microsoft and has been involved in many philanthropic efforts in the local community and abroad. Their contributions to the arts were recognized so much that Seattle’s mayor in 2004, Greg Nickels, proclaimed April 26th “Massive Monkees Day.”

Khmerican: What are some of the early moments in your career that stand out?

Lil Lazy: “There was a one-on-one b-boy battle hosted by Crazy Legs [Rocksteady Crew of NYC] called Break Beats. I did really well, making it all the way to the finals. I got to battle Rynan “Kid Rainen” Paguio of Killafornia/Jabbawockeez. It was a really exciting battle.”

“Another battle that stuck out in my career was a battle at the University of Washington called Mountain Brothers. I battled G-Whiz and made it all the way to the finals.”

“We won the Apollo, here in Seattle and once in New York. We’ve also been featured in the media, including King 5’s Evening Magazine and on various local newspapers.”

Khmerican: What type of reception do you get on the international stage?

Lil Lazy: “Internationally, breakdancing is big, with many governments giving official support, sponsoring b-boy events and even paying dancers so they can make a living from it. When we flew out to Japan and Korea, they took really good care of us. They took us sightseeing and shopping.”

“We went to Japan for a battle called ‘Battle Runners.’ They made posters for the event and had our pictures on it, and then when we were walking on the streets, people recognized us and were really thrilled. Everyone shows us love. It’s exciting!”

Khmerican: How about in the states?

Lil Lazy: “We get recognized here. When we do tours around the US at colleges and other events we also get lots of love. We’re a well respected crew. In Seattle, the b-boy community is big, and we all know each other.”

Khmerican: You guys also performed on the professional stage locally, for the former Seattle Supersonics known as the Boom Squad. Tell us more.

Lil Lazy: “That started in 2004. Susan Hovey, who was the dance instructor for the girls’ dance team, hooked up with us and introduced us to the organization. That’s when the Boom Squad was formed. In 2005, we got voted to perform at the NBA All-Star game in Denver. That trip was awesome. I met Magic Johnson, Carmelo Anthony, Beyonce, and many other celebrities that I don’t know. I don’t watch too much television so didn’t know who a lot of them were until friends and family pointed them out in pictures.”

It wasn’t uncommon to see the Boom Squad in action during Sonics home games and even away games. They performed during breaks and at halftime shows. The Seattle Supersonics was a NBA team from 1967 to 2008, being one of only two professional sports teams, alongside the WNBA Seattle Storm, to bring a championship in professional sports to the city. In 2008, a year filled with controversy surrounding the team, the Supersonics organization relocated to Oklahoma City, where they became the Thunder of OKC. In the recent 2012 NBA Finals, the Thunder was defeated by the Miami Heat.

Lil Lazy: “I’m sad that the Sonics left. It was one of my jobs, and at the same time, I was so used to hanging out at the Key [Arena] for those 4 years…”

“I even met Howard Schultz [CEO of Starbucks and former owner of the Supersonics]. When I was an electrician, I was working at a penthouse in downtown Seattle, putting up lighting. As I was riding the elevator, the owner of the penthouse says to me, ‘Hey, how are you? I remember seeing you all the time at the games.’ I didn’t even know that was Howard Schultz until my boss told me.”

In 2009, Massive Monkees auditioned and were selected to compete in MTV’s America’s Best Dance Crew. Their talent took them to third place, beaten out by Afroboriké and We Are Heroes. Already internationally recognized b-boys, this competition brought them newfound mainstream recognition at home, in the United States.

Khmerican: How was the experience auditioning and then competing in ABDC?

“It was a great experience. I got to meet a bunch of different dancers from different states. We had one thing in common: the love for dance. It was inspiring to see all different types of dance styles in one room. We all bonded very well. It was sad when each week a team got sent home. Each week got lonelier and lonelier.”

Lil Lazy: “It was one of the most exhausting things that I have ever done. We had three days to create, choreograph and practice a routine for the song that was chosen. Once we finished choreographing our routine, MTV’s choreographers would look at it to see if it was good enough to be on TV. Most of the dances were a combination of routines we had performed in the past which we tweaked to match the music and the challenge they gave us.”

Khmerican: Earlier, you mentioned that you traveled internationally and held workshops and classes on breakdancing. Were you doing that for a living?

Lil Lazy: “We did a lot of traveling. We went to Korea, Japan, Norway, France, London, Denmark. Juse and I taught classes and held workshops and judged a battle in Norway for a week.”

“Yes, there was a point when I was living off of dancing and teaching breakdancing to kids at the after-school program at Mercer Middle School. But we were also doing a lot of work to help the communities we came in contact with, and we volunteered a lot of our time, locally.”

In 2008, Massive Monkees member Phanna Nam, alias Peanut, moved to Cambodia to teach breakdancing. He is now a member of the NGO Tiny Toones, which seeks to help empower youth through breakdancing.

Khmerican: Among the many different philanthropic undertakings Massive Monkees has been involved in, you’re personally involved in social work in the local Cambodian community. Can you speak to that more? 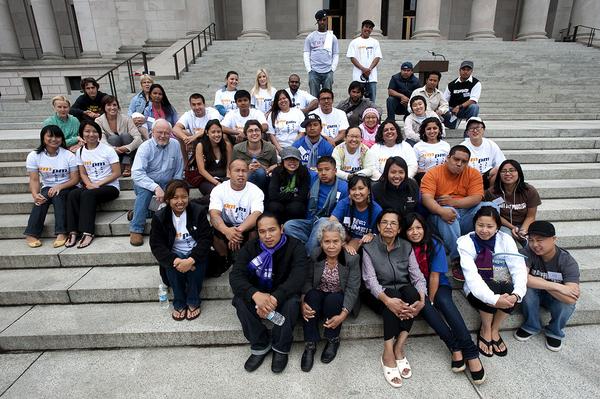 Lil Lazy: “I was involved with KIA (Khmer in Action) with founder Many Uch. KIA’s vision was to build a strong and loving community of Khmer people working together to create equality for socio-political justice. For a time, we were a very vocal and outspoken service to the Khmer community. We also participated in marches for health care reform and LGBT rights, fighting deportation, and advocating for youth programs.”

Khmer in Action was a social advocacy group formed in 2007. One of the more high-profile members was Many Uch, who became an icon of the movement to fight deportation of Cambodian refugees back to Cambodia. Uch is one of the central figures in the documentary “Sentenced Home.” This documentary portrays several individuals from the Cambodian community as they go through the process of eventual deportation. In 2010, Governor Christine Gregoire granted Many Uch an unconditional pardon due to his contribution to the community.

Khmerican: Something that is definitely useful for working with/for the Khmer community is the ability to read and write Khmer. Was your ability self-taught or did you take classes?

Lil Lazy: “I grew up in Holly Park [housing projects in South Seattle]. I learned how to read and write at the old Khmer Buddhist temple on Juneau Street.”

Wat Dhammacakkaram, established in Seattle’s Beacon Hill neighborhood in the 1980s, was one of the first temples serving the local Cambodian community. On February 10th 2010, a fire damaged the temple, and it has sat vacant ever since.

Lil Lazy: “I have been learning since I was 6 years old. My Khmer reading enhanced after watching Khmer karaoke videos. I sing and listen to it every day. It’s inspiring to me. I am a big fan of Sinn Sisamouth.” 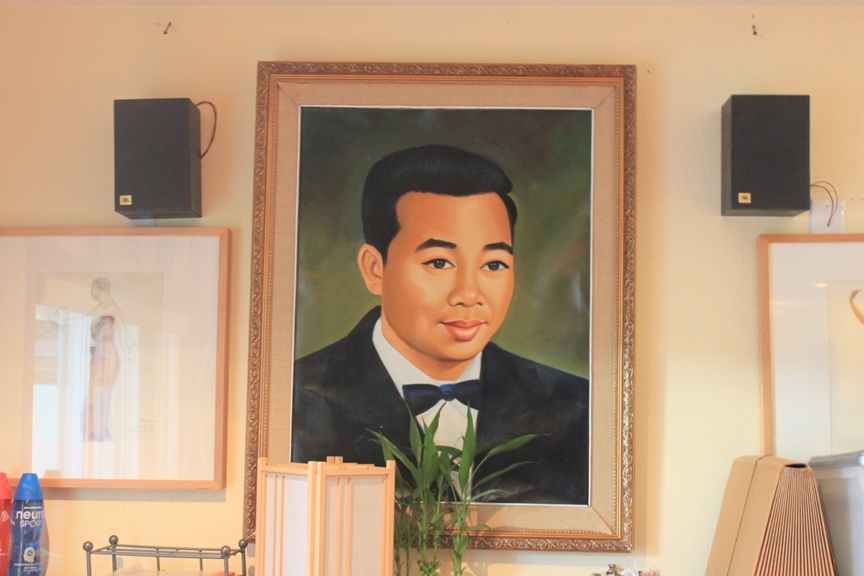 Samnith Ly continues to work toward social enrichment in the community. In February, along with close friends under the banner “iKhmer,” Ly hosted a Valentine’s social to gather the younger generation of the community and discover new talent. In April, Massive Monkees hosted the 13th anniversary of Massive Monkees Day, which featured a breakdance competition judged by members of the crew, with proceeds going to a dance studio. In May, Samnith Ly and his wife welcomed a baby boy into the world. As a contribution to the breaking culture, Ly is given credit by many for the “air chair/air flair,” including recognition by renowned b-boy Kareem of Killafornia.