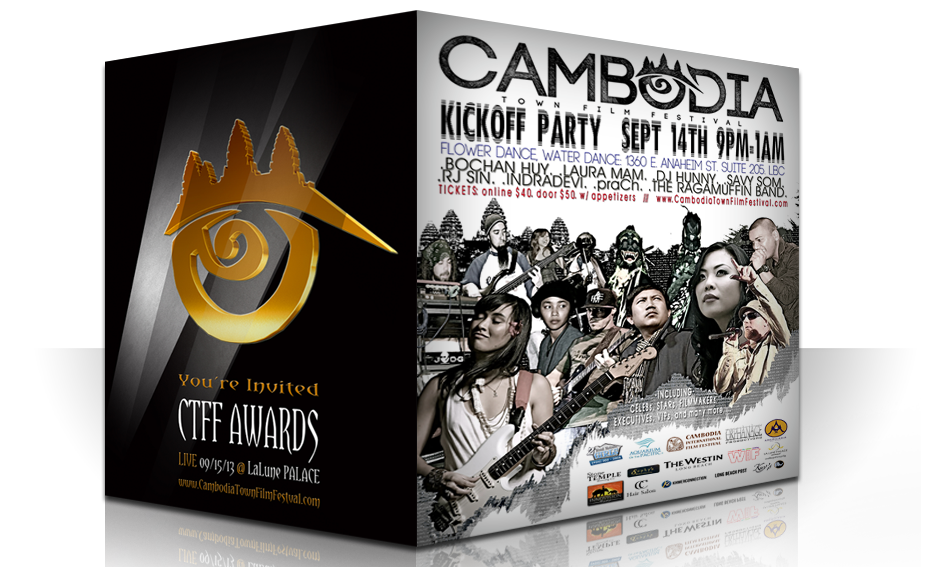 For some time, the pairing of “film” and “Cambodian” has most often brought to mind the iconic 1984 film “The Killing Fields,” but little else. This coming weekend, film goers in Long Beach have the chance to experience Cambodian stories beyond that tragedy via the Cambodia Town Film Festival (CTFF), taking place September 14th and 15th at the Art Theater on 4th Street. The first film festival of its kind in the country, the two-day event will showcase 16 films ranging from feature-length productions to shorts, animated films and music videos, all exploring Cambodian themes that move past the familiar historical narrative, opening doors for intellectual and artistic exploration.

Films to be screened include selections from both Cambodian filmmakers and others, speaking to the festival’s mission of sparking a more global dialogue on Cambodian culture and society. Up first on the line-up is the documentary “A River Changes Course,” directed and produced by Kalyanee Mam. The film was a selection from this year’s Sundance Film Festival and explores the damaging effects of growing development in modern Cambodia. Simultaneously, it confronts non-Cambodian viewers about the meaning of work and making a living. “Comfortably Lost,” by director Quentin Clausin, tells the story of an American photographer’s spontaneous journey to Cambodia. Finally, the older Khmer generation might especially anticipate the screening of Ly Bun Yim’s “On Ey Srey Orn,” the 1972 classic about a love triangle amidst class differences set to a Sinn Sisamouth soundtrack and newly subtitled in English. Those are just a sampling of the films to be shown, with more events happening throughout the weekend.

The festival’s website features a promotional trailer of a fast-paced, dramatic montage of the weekend’s films, tempting the viewer to see more while showcasing the professional quality of the festival’s overall production.

Caylee So, a co-director of the festival, hopes that the event gets noticed while bringing a shared awareness to the community. “I have this imaginary situation constantly looping in my head, where some young Khmer American sees our festival trailer, runs home, excitedly tells their parents about this thing that these people in Long Beach are attempting to put together,” said So. “And as a result, their parents get extremely motivated to attend, and orders their kid to buy the tickets online.”

A filmmaker herself, So is just one member of an organizing team of nearly 20 volunteers, also led by praCh Ly, a local rapper and community advocate with an international following. The event has been years in the making, an early brainchild of Ly finally brought to fruition by an immense collaboration of individuals uniting for one common goal: to share Cambodian and Cambodian American experiences through cinema.

“This film festival is truly a labor of love. Even if we only sell one ticket, the journey from its conception has been a long one filled with so many great memories and adventures, that we’re just proud to be opening our doors to everyone in just one week,” said So.

Although the CTFF team has been marketing the event widely among the Cambodian community, organizers want and expect to attract a sizeable non-Cambodian crowd as many of the films highlight cross-cultural themes. CTFF can be viewed as part of a larger trend of cultural film festivals making an impression across the country. While big-name film festivals like Sundance, Telluride, and Tribeca make arts page headlines leading up to awards season, cultural film festivals like the Chicago Latino Film Festival and the Berlin & Beyond Film Festival in San Francisco have carved a niche in their cities while raising awareness of their group’s culture and stories via the silver screen.

“These festivals are unique in that it unites a specific community,” said Anthony Nget, a local resident and recent graduate of Cal State Long Beach’s film program. “It creates a platform where the creators and audience members are the same people.”

Tickets for the festival range in price, but day passes can be purchased for $30 each, allowing access to an entire day’s worth of screenings followed by Q&A sessions with directors and producers. The weekend’s itinerary includes musical performances and after-parties such as a kick-off party at Flower Dance Water Dance Restaurant on Saturday night and the culminating CTFF Awards Ceremony on Sunday night at La Lune Palace.