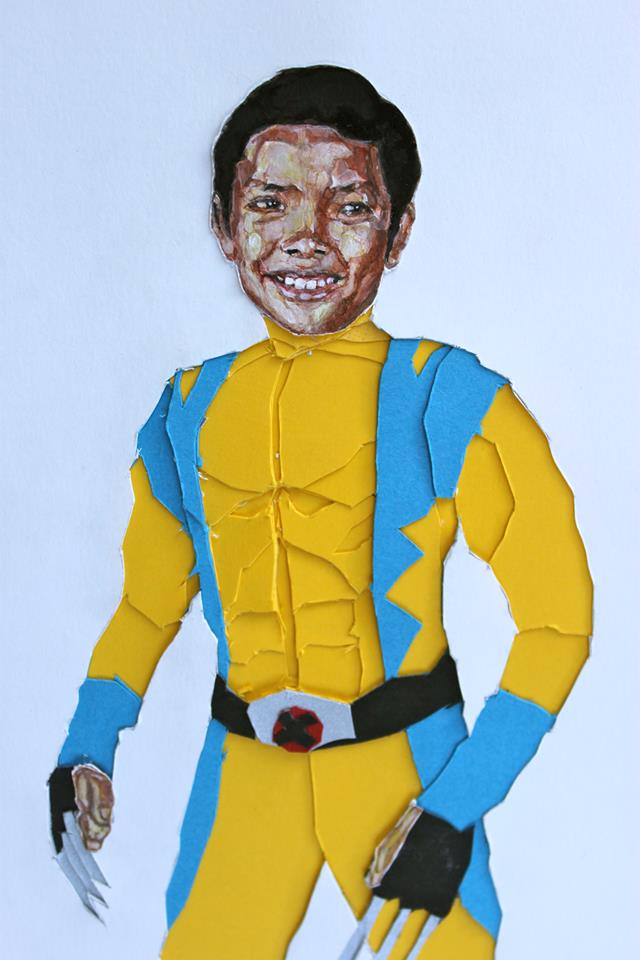 As a child my heroes were Batman, Superman, Spiderman, Hulk, Wolverine.

All my favorite superheroes had special powers, wore capes with brightly colored tights and had fancy gadgets.

They could jump tall buildings, fly across the sky, beat up bad guys and save the world from evil.

I wanted to fight crime, save a pretty girl and protect the innocent.

I couldn’t wait to watch their shows every Saturday morning.

During the week I had to be dragged out of bed, almost kicking and screaming just to get ready for school.

But on Saturdays, without an alarm, because my body knew this was the day I get to spend with my heroes,

I was up at the crack of dawn, wrapped in my favorite blanket.

I curled up on the floor in front of our television set with the wooden frame and the aluminum foil as its antenna.

I had a package of crushed up dry Wai Wai noodles to snack on, and I was ready to spend the day with my superhero idols.

Ready to watch Spiderman catch bad guys in his web,
ready to see Hulk smash and Wolverine slice,
ready to see Superman fly across the sky.

There was always an evil villain, ready to destroy the world,
but some how, some way, against all odds, the superhero always saved the day.

I idolized these men in tights, with the special powers,

I felt safe knowing that they existed even if it was only in a cartoon on TV.

And so I looked forward to Saturdays—they saved me from the world I was actually living in.

I was born during war in Cambodia, a child of the Killing Fields, a survivor of genocide, an immigrant child of the United States of America.

I was picked on and teased for not knowing the language,
not living in the best house, my family being on government assistance, not having the right clothes, not fitting in.

I cried every day coming home from elementary school; I never had any friends.

I wanted so badly to fit in, to be liked, to have someone to play with during recess.

I loved the classroom, and hated recess (imagine a kid hating recess).

Recess put my loneliness on display for everyone to see.

I never had a friend to run and play with, I was the kid who sat by himself, waiting for the bell to ring so he could be back in the classroom under the protection of his teacher and disappear into the back of the room.

All I wanted to do was fit in, to hide who I was, to be someone everybody admired and loved.

I wanted to be a superhero.

Halloween gave me that opportunity. I was given a mask that was donated from the local church.

Being the youngest in the family, my little brother and I rode in the back of the trunk space just staring blankly at cars behind us (this was the time before seat belt laws).

We drove to our sponsor family’s house; they were an elderly white couple named Mary and Dana who treated us like we were their grandchildren.

Their whole neighborhood celebrated Halloween (the area we lived in was too poor to be in the spirit).

Not really knowing what this American holiday was about, we were given a few instructions on what to do and say in order to get candy from the neighbors.

Armed with this new knowledge, I put on my mask, and along with my cousins, we ventured out into the night in search of goodies for our bags.

We went door to door asking for candy and no one denied us; to a child from a third-world country, it was amazing.

All the neighborhood kids were in costume.

I was walking down the sidewalk with Spiderman.

I was right behind Wonder Woman as she said “trick or treat!”

I ran with Batman to the house across the street.

I helped Cinderella with candy that she had dropped.

There were princesses, knights, goblins, witches, ghosts, and most of all, superheroes.

No one cared where I was from, or what I looked like underneath my mask, or even if I spoke English, all they cared about was how much candy I had and which house I got it from.

This was an experience of a lifetime to an immigrant kid less than a year removed from Khao-I-Dang camp in Thailand, and, just a few years before that, from the horrors of the concentration camps of the Killing Fields in Cambodia.

With no friends, I was the kid who never spoke up, who wanted attention and approval but never knew how to get it.

My first Halloween gave me the confidence I needed to speak up, to ask for help, to reach out and make friends. It’s been over 30 years since that day. I do not remember exactly what mask I was wearing, but I will never forget the feeling it gave me that night.

I was a SUPERHERO.