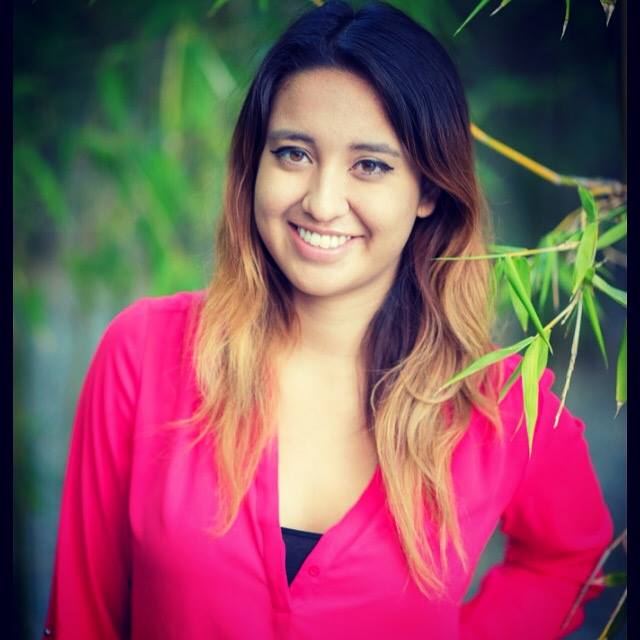 My name is Eleni Ahmahra Kapoulea (@khmeropean_92). My Khmer family calls me Ahmahra but everyone else calls me Eleni. I am 22-years-old and scheduled to graduate from University of California at San Diego in 2016. I am half Greek half Khmer, with my mother being Khmer. I am an only child, but the youngest in a group of cousins.

I did not grow up in a Khmer community at all. My only Khmer influence was my mother’s side of the family, which was enough for me to feel connected and proud. My father was not in my life at all times so when my mother was at work, I was taken care of at home by my mom’s parents, my mak yeay (grandma) and lok ta (grandpa). They spoke to me only in Khmer and it was all I spoke when I was growing up. My father at one point complained that he could not communicate with me because it was all I spoke. When I went to school, I began to speak English but still practice Khmer with family and some Khmer friends. With my grandparents came a lot of stories about the Khmer Rouge and how my mother and her 5 siblings worked very hard to survive during the war. My family escaped and survived in a refugee camp before being transported to southern California. It was there they began their new life.

My grandparents worked many jobs to support their six kids, including the typical donut shop jobs, working in a gas station, and working at Carl’s Jr. My mak yeay actually has a picture of her meeting the “Carl” of Carl’s Jr. Their stories gave me grief at how hard they worked but instilled a lot of pride in me of being Cambodian and knowing the struggles that my family went through to survive in this country and succeed. Despite helping the family work long hours in the donut shops after she got home from school, my mother was able to support herself through school and receive an engineering degree from the University of California at San Diego. It was strange being a part of this culture with no one outside my family to share it with, which is why I appreciate the Cambodian Student Association at UCSD so much. They give me a space that I feel connected to my culture and help me feel less alone.

I am a Cognitive Science Major that has a concentration in Neuroscience. I am currently minoring in theatre as well. My ultimate dream would be to continue with acting and pursue an MFA degree at a respectable institution. However, if this does not work out I think I would be happy and appreciative to be able to perform research in the neuroscience field.

It is important for me to know my mother’s culture because it has provided me with a great sense of identity. While many would argue I do not look Khmer, I certainly feel Khmer. My first language was Khmer and being surrounded by Khmer family members passed down varying traditions and cultural norms that I have found that I share with other Khmer youth. I try to keep in touch with my culture as much as I can because I believe that you must know your past in order to move forward. I believe that the voices of our ancestors who suffered from the war pass down great lessons to us about survival, strength, and compassion. Those voices must be heard and understood.

My first role model would be my mother because I believe she works very hard to support her family and is a symbol of strength for me. Since my grandfather became sick with cancer, she has been his primary caretaker, taking care of him while working a full time job. She has survived being forced to move to another country, racism and discrimination, and the overall struggle of receiving a college degree with English as her second language. I have never heard her complain about how hard it was to do those things, she just does them with strength and tenacity. I think that through these things, she truly possesses the Khmer spirit of strength.

In my spare time, I love to do yoga to feed both my mental and physical needs. I also love to act and hope to pursue this further. I love to write as well and have had my work published before.

I first went when I was eight years old. I remember at that age being so excited at seeing and meeting other people who spoke the same language as my family. It was the first time I didn’t feel so alone in being Khmer. I have just recently gone this year as well to Srok Khmer after 15 years. The most memorable moments for me were spending time with my family at Angkor Wat and going to less touristy towns such as Battambang and Pursat and tasting the delicious food. I tried bee larvae. I also touched an elephant and had fish bite at my feet in Siem Reap. In short, Cambodia is a beautiful, vibrant place and everyone needs to go.

Ten years from now I will be 32. I hopefully will have a partner and will be starting a family. I also hope to be working, ideally in the theatre or other acting jobs which I find fulfilling. As anyone in the world, my ultimate goal is to be happy and fulfilled. I hope I can accomplish that.