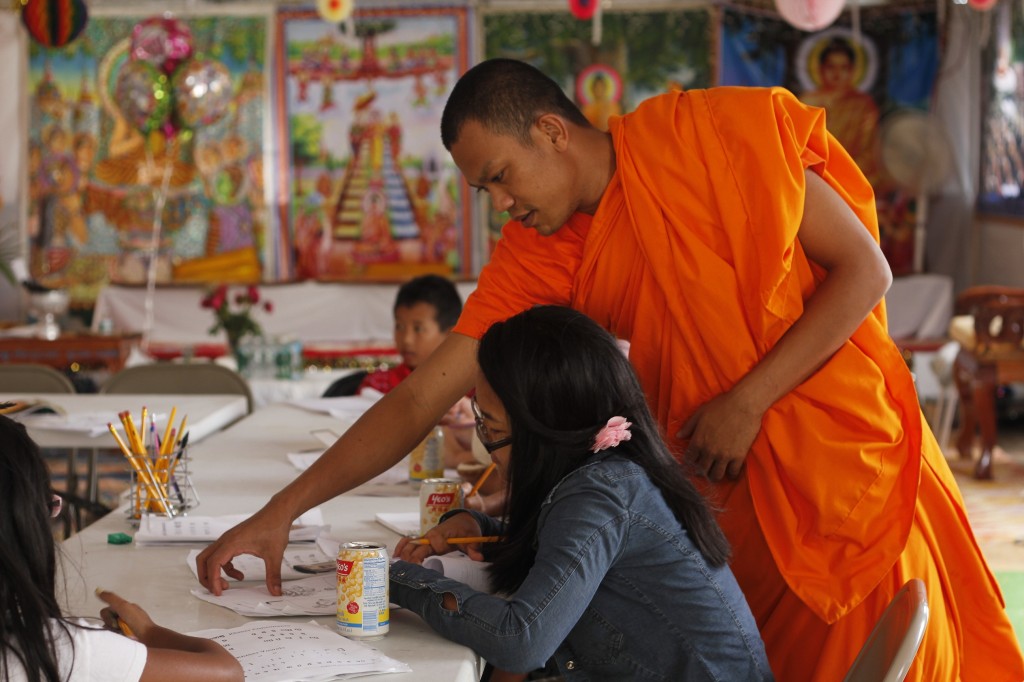 PROVIDENCE, RI — At the Buddhist Center of New England on West Clifford Street, Venerable Sochettra Yieng made a verbal statement the very moment students started to arrive inside the temple: “The younger Khmer generations are unaware of how to respect their culture, language, and the Buddhism religion. It is not that they purposely do it, but because the adults—the parents who do not teach them, and it’s really not their fault.” Perhaps his comment rung true with the community since it does apply to so many today, especially the youth—how does one speak to a Buddhist monk in Khmer, and what is the chanting that monks do in the temple?

Since the program’s inception in 2006, it has attracted quite a few children from the local neighborhood. The hour-and-a-half Khmer lessons are run by the monks at the temple. Eventually, people from other areas likePawtucketand even non-Cambodian folks came and partook in the program. However, as time has passed, attendance has been sporadic. Regardless, the monks always seem optimistic with its younger generation as the Khmer lessons continued.

Cloaked in the traditional saffron garb that many Buddhist monks wear, Venerable Yieng was glowingly cheerful as students ambled in for their weekly summer session. “I’m always happy to see when children want to learn. They come and sit as I teach from the [easel]. Sometimes, they cannot understand what I say in Khmer. But we work from the beginning with the alphabet, and we always end in chanting the Dharma together. It’s a lot, but we go step-by-step.”

There were about a dozen students present that day, with ages ranging from 6 to 20. Some of them can barely utter basic Khmer words, and some are actually able to converse a bit in Khmer. Though, after observing the whole lesson, this might have been due to the age factor—older students communicate in Khmer better than their younger counterparts. One of the first students to arrive was a 20-year-oldRhode IslandCollegestudent, Kimleang Heng. She doesn’t mind being the oldest but still felt it was her personal duty to get in touch with more of her culture, despite the age difference between her and her classmates. “One of the reasons why I wanted to come here was because I wanted to learn to read and write Khmer. [I can speak], but just trying to learn [the alphabet] by myself at home with a book is much more difficult, and I can’t do it. So I came here to the temple instead because it’s much calmer, and that’s a bonus,” said Heng.

The class began with a review of prior weeks’ lessons on consonants and vowels. All 33 consonants were pre-written on the easel along with sub-consonants underneath each letter, and then the 23 vowels. Venerable Yieng pointed and uttered ‘gaw’—the first consonant—and the class slowly followed by reciting the sounds after him. Next, he directed individual students to go up and read out the letters in front of their fellow classmates. Following the recitation, the monk presented some visual aids to accompany the lesson. The children were given illustrations of common animals and items for word association, such as ‘chmaa’ for cat and ‘plet’ for hand-held fan, of course written out in the traditional Khmer script.

Not many places around the state offer lessons in Southeast Asian languages. Thus, visiting the local temple provided an opportunity for an outsider to get a sense of what these students desired to gain from learning the language. Technically, Khmer is a foreign language to them since most of the children were born and raised here in theUnited Statesand speak mostly English.

Other students like Kalynn Khun, 9, expressed an interest in learning her parents’ native tongue because of her concerns about the communication barriers between the youth and the elders. “Ever since I was born, my parents spoke Khmer to me, but I never held onto it like I did with English,” she said. “I think it’s great to learn it because I can talk to other people, especially older Cambodian people.” Jonathan Sao, also 9, despite being there for only 10 days shared similar sentiments. “Cambodian is hard to learn, but I want to learn the language because it’s good for me to communicate with adults and also know more about my culture,” said Sao.

Another monk at the temple, Venerable Vichet Yan, conveyed his personal feelings about the importance of providing a place to teach young Cambodians about their culture and religion even inAmerica. Throughout his lengthy explanation and in between occasional pauses, his halting English required him to repeat certain statements at least twice. However, he concluded his thoughts by putting forth a distinction: “Cambodiaisn’t Buddhism, and Buddhism isn’tCambodia.”

Subsequently, one of the last students interviewed that day had an interesting viewpoint about the conflicting dual cultural experience most Khmer children face today inAmerica. Monita Minea, 14, recounted being born inCambodiaand then immigrating to theUnited Statesin 2004. “I knew a little bit of Khmer before because I lived there for 7 years, but I don’t know much of the language now,” she said. Despite her young age, she offered a more prescriptive insight into the 1.5/2nd generation of Cambodian-Americans. “Most of what I know is here inAmerica, and the people I know all speak English,” Minea added. “But I think it’s good to be bilingual. You shouldn’t [have to] lose one culture for another, and that’s important [to remember].”

Before the 90-minute Khmer session ended, the children already habituated to their routine walked towards the altar in the front of the temple. With respect to Buddhist conduct, kneeling, the boys were in the front row beside the monks and the girls were side-by-side in the back row. In prayer position, they bowed their heads three times and began chanting the Dharma led by Venerable Yieng and Yan.

Examining the temple, its internal appearance and location in the center of an urban neighborhood were a contrast between what the monks had mentioned earlier and the children’s statements. Inside, the vivid colors of orange and yellow, the smell of dozens of burning incense sticks in urns, and large decorative Buddha statues at the altar were emblematic of the culture and religion with which these children’s parents are familiar. When the session finally ended, the children scrambled to the exit to put on their sneakers and gleefully rushed outside decked out in American-branded clothes and sleek backpacks. Having completed their studying duties for the day, they reverted back to conversing with one another in their usual English while awaiting their ride home.