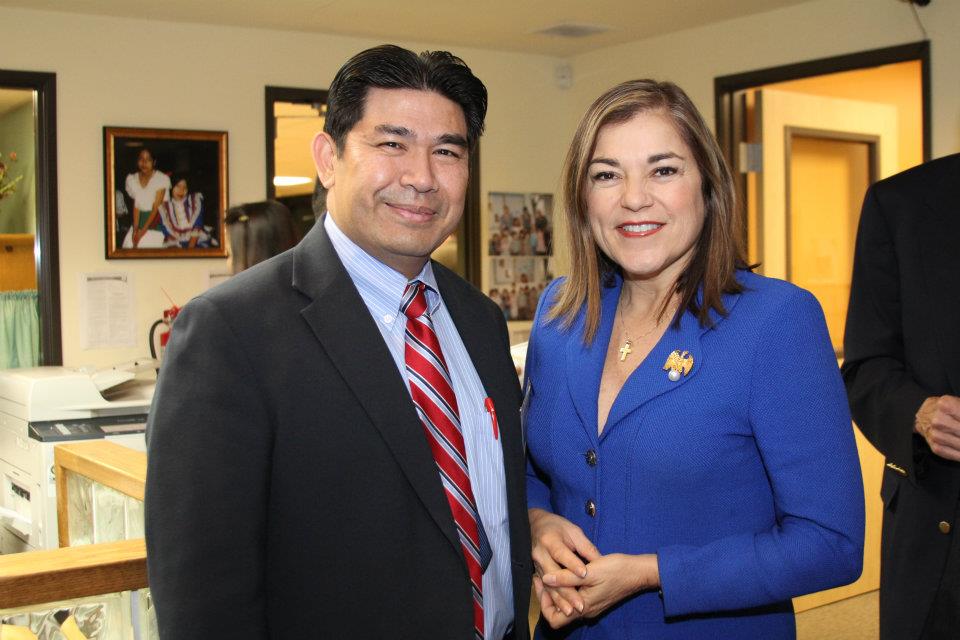 Santa Ana, CA — “The Lotus rises from the dark depths of muddy water, reaches toward the light, and becomes a beautiful flower.”  Like the triumphant flower, The Cambodian Family, which found its roots in an impoverished area of Santa Ana, has risen to become an exemplary multi-ethnic human services agency promoting social health in Orange County.  On November 10, 2011, over 300 attendees celebrated the 30-year anniversary of this non-profit community service organization. 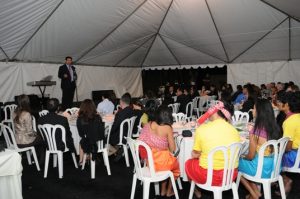 Sundaram Rama, Executive Director of The Cambodian Family, delivers a closing statement to end the evening.

In 1981, a group of Cambodian refugees who had survived the “killing fields” of civil war and genocide, resettled in the Minnie Street neighborhood of Eastside Santa Ana, an area historically known for high crime rates, gang activity, and illegal drugs.  Amidst the urban flotsam, a faithful few envisioned a better future for themselves in their adopted country, leading to the formation of The Cambodian Family agency.  They pooled their resources to rent a modest one-bedroom apartment where volunteers could teach English to new arrivals and provide various resettlement services such as meeting basic needs and document translation.  The Cambodian Family developed support workshops to help refugees overcome their recent trauma, learn new skills, and move forward with their lives.  Since then, The Cambodian Family expanded to include youth programming and health services benefiting uprooted people from places such as Cambodia, Latin America,Vietnam, Iran, Ethiopia, Russia and more.

The evening’s program included awards and recognition of honorees for their work with The Cambodian Family such as Rifka Hirsch, the agency’s former Executive Director of 25 years.  Under her leadership, the agency has provided job assistance to several thousand low income residents, helped over 100 youths attend college, and helped hundreds to access heath care.  In her tenure, The Cambodian Family, offered Employment Services, English as a Second Language (ESL) Classes, Community Health Services, Kinder Readiness Program, Childcare, and Cambodian Language and Heritage Classes.  Moreover, it was Rifka Hirsch who oversaw the establishment of the Youth Program, an essential component of The Cambodian Family.

The Cambodian Family was instrumental in assisting Phally Ry, a school teacher and UCLA graduate, who was a former participant in the agency’s Youth Program.  She shared about how taking part in agency sponsored events, workshops, and activities helped her to develop the necessary knowledge and confidence to succeed in school and jump-start her career.

“The Cambodian Family was a sanctuary against the dark realities that surrounded my life; like gangs, crime, and arranged marriages.  They took care of me and guided me through the obstacles I faced when I was applying to college.  I was clueless and my parents could not help me because they had never been to college.  The Cambodian Family helped me to dream and to achieve a better life.  They taught me to fly.”

The Cambodian Family is able to provide these essential services because of their partnerships with local organizations and businesses such as The City of Santa Ana, St. Joseph Hospital, Wells Fargo, and the Santa Ana Unified School District.

Congresswoman Loretta Sanchez and Santa Ana Council member Vincent Sarmiento presented Certificates of Recognition to The Cambodian Family for all the important work that the agency put forth in bettering the community.  Dr. Audrey Yamagata-Noji, a Santa Ana School Board member for 20 years, delivered the Keynote address highlighting the numerous accomplishments of the agency such as The California Wellness Peace Prize to Phalen Lim, the Santa Ana Federal Empowerment Corporation award of $1.96 million to purchase a new facility and the Bank of America Local Hero Award to Rifka Hirsch, former Executive Director. 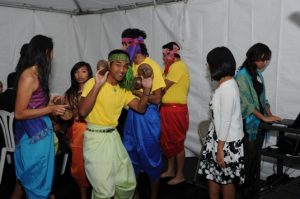 In addition to awards and recognition, there was a networking reception, silent auction, tour of the new facility and stellar performances by The Cambodian Family Dance Group and singers, Phanith Sovann and Blanca Manzo.  At the conclusion of the evening, there was a video presentation, produced by Sotheara Chhay and Linda Sok, highlighting milestones in the 30-year journey of The Cambodian Family agency.

Under the direction of current Executive Director, Sundaram Rama, the agency’s focus is on promoting community health, providing opportunities for youth, helping children with school readiness, preparing local residents for workforce training, and food distribution.  If you are interested in volunteering, supporting or learning more about The Cambodian Family, please visit the website at www.thecambodianfamily.org or call (714)571-1966. The agency is located at1626 E Fourth St Santa Ana,CA92701.

—
Sophin Zoe Pruong-McCreery is a freelance writer and artist.  An alumna of Whittier College, she was awarded the Heritage Language Fellowship for the South East Asian Studies Summer Institute at the University of Wisconsin, Madison. She actively volunteers for non-profit organizations near her hometown, Santa Ana, CA.

A Love Without Fear
To Top