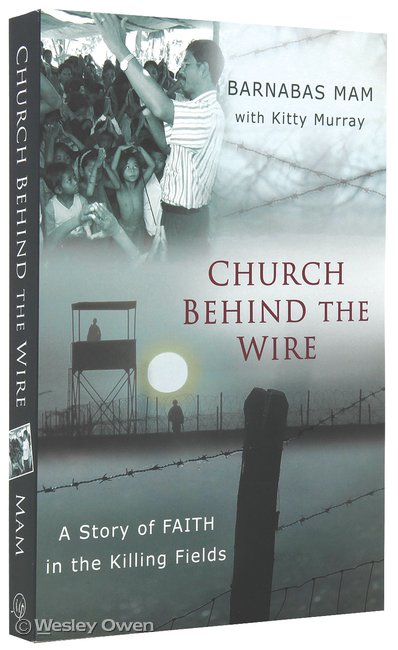 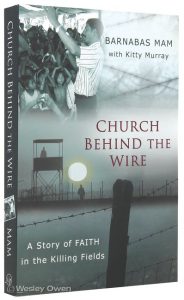 Church Behind the Wire: A Story of Faith in the Killing Fields

By Krystal Chuon
Special to Khmerican

Hope and faith may seem hard to hold on to when those around you are being viciously killed or treated with disrespect as lowly human beings. You don’t know the status of your family or your friends, so you begin to wonder, “Why am I alive at all?” But Barnabas Mam and others like him endured hunger, pain, and constant fear under the Khmer Rouge regime that began on April 17, 1975, when it took over Phnom Penh under the power of Pol Pot, the Khmer Rouge’s leader. Church Behind the Wire: A Story of Faith in the Killing Fields by Barnabas Mam and Kitty Murray follows Mam through his life as a young boy who grew up with Buddhist values but became a devout Christian when Christians were not accepted in Cambodia’s society, during the Khmer Rouge years.

Mam joined a group of Communist activists, claiming that he joined because he was “a patriot who believed in peace.” His encounter with Christianity that led to his conversion began when Mr. At Veth, his mentor, asked him to attend an evangelistic crusade held by Dr. Stan Mooneyham. Mam and others who were a part of the Communist movement viewed Christians negatively, because anything influenced by the Americans was bad in their eyes. So, Mam went on to spy at the meeting that night, yet came to the important realization due to Dr. Mooneyham’s words—that “a loving Creator God was behind all of the precision and beauty of life.” Mam became a believer in Jesus at that moment. He later mentions that Communism may have prepared the path for him to leave Buddhism for Christ.

And thus began Mam’s journey as a devout Christian, a decision which he credits for helping him beat all odds under the Khmer Rouge regime. Mam suffered in prisons, had to bury his friends, starved for days on end, and had to endure the words spewed by cruel cadres who tried to break him down. But Mam’s faith kept him going. He sought help in tough times by praying and asking God for help and help was always there. When Mam fell terribly ill and contracted various infectious diseases, he was cured each and every time by a healer, and even a cadre took pity on him when Mam developed an eye infection. Some may view the healing as merely miracles and nothing else, but for Mam, it was more than that. He claims that he knew God’s plans for him and that these were his plans, or perhaps the beginning of them.

Toward the end of the memoir, Mam becomes a pastor and leads prayers at churches built at the Thai refugee camp he lived in with his wife and daughters for eight years. He provided help to many fellow Khmers and others through his Christian faith. Even when times were tough and when he felt like quitting, he endured through the hardships. Today, Mam is still a pastor in Cambodia, and over 400 churches have been established in Cambodia.