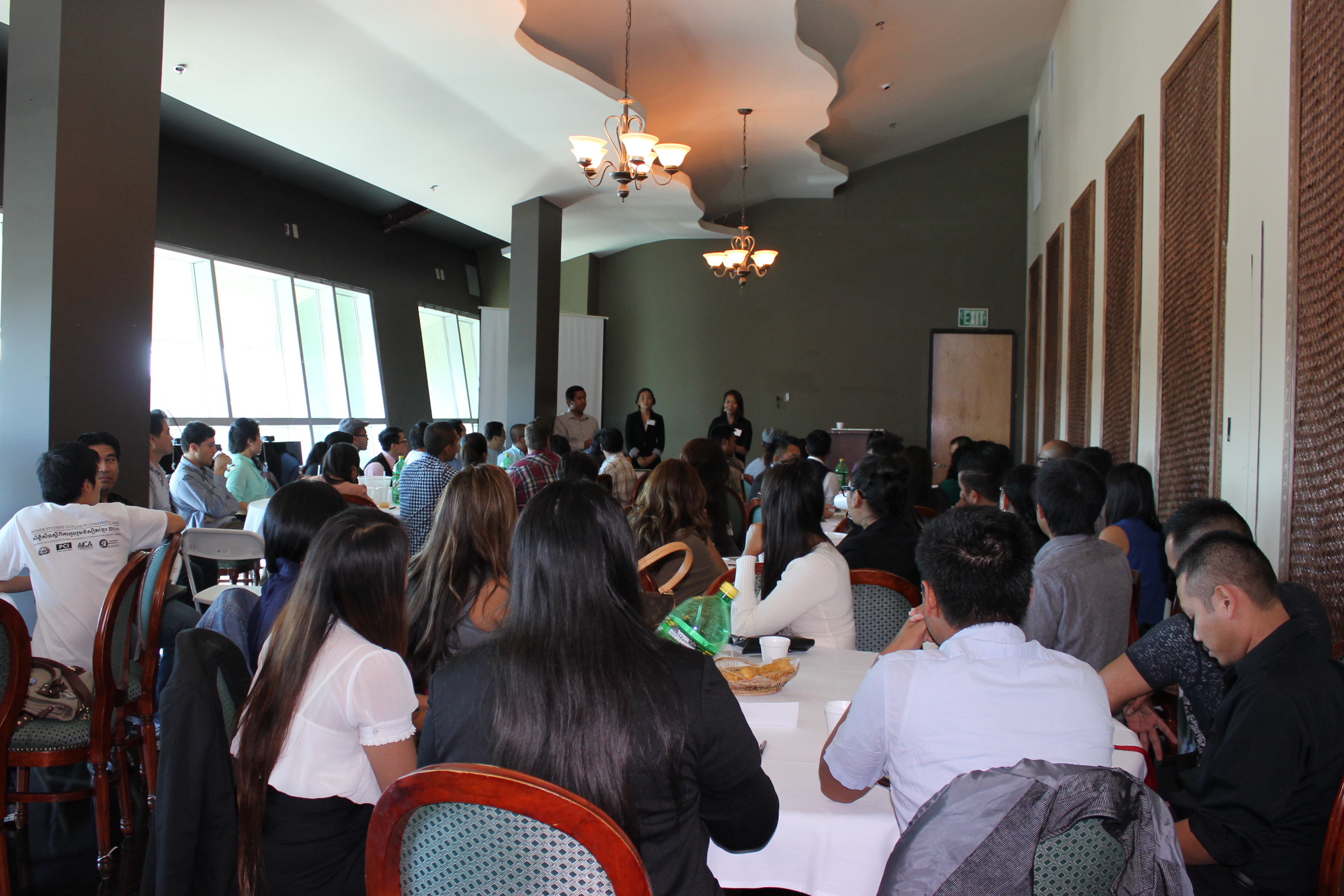 Long Beach, CA — In an uncertain economy, many are looking for an edge that will help them land that next job or help them hone their current skills to stay competitive. Reconnecting to one’s ethnic community can be surprisingly rewarding in that regard. This is especially true for those who were once involved in cultural organizations as undergraduates, but may have become estranged because of their busy post-graduation lives. The Khmer Alumni Association (KAA) had just those considerations in mind during its first ever networking social. A banquet room at La Lune Palace was packed with professionals, students, and business owners, who had a clear scenic view of Signal Hill outside the restaurant’s third-story windows.

Over 80 participants attended the Khmer Alumni Association Networking Social on the second day of the Khmer Student Coalition Conference, which was held October 20th and 21st. This year, the two-day conference’s theme was “Lotus Legacy: Revive & Flourish,” hosted by the Cambodian Student Association of California State University, Fullerton (CSA CSUF). The conference was established with the hope of connecting Khmer students with one another and has been hosted by various California university campuses since its inception in 2006.

“The networking social was the first collaboration of its kind, with KSCC evolving and growing to be what it is today. One of the goals for KAA is to continue this tradition and provide networking opportunity for all KSCCs thereafter,” said Linda Sok, a Community Organizer at The Cambodian Family in Santa Ana, CA.

After a brief introduction of the group’s board members, including Phanith Rama Sovann, Linda Sok, Eric Chuk, Sereywath Keng, and Sotheara Chhay, the audience was given an overview of the mission of KAA and its membership benefits, a “Value of Networking,” presentation, and a discussion of challenges facing Cambodian Americans’ upward mobility. Michael Saing, co-owner of La Lune Palace, also helped welcome participants to the newly renovated facility. He shared some thoughts about the challenges of operating his family-owned businesses, the importance of networking and his commitment to helping build a more prosperous Cambodian American community.

Indeed, to date there has been no clear place for Khmer alumni from various schools to stay in touch with their community roots, ties that are stronger when new friendships and enthusiastic extracurricular activities are a natural part of the collegiate experience. Upon graduation, for many alumni such opportunities fade as the reality of working life sets in and former students become full-time employees who are busy in their careers or with starting families of their own.

There was tacit recognition of that fact throughout the networking day, as participants spoke with other current KAA members at their table and used ice-breaker questions to get to know one another, finding ways to mutually benefit from establishing rapport. Following the networking component, a speaker from each table introduced another participant and gave a brief highlight of their career, skills, or goals.

Ratha J. Sim, an upcoming rapper and musician from Oakland, CA, introduced his new friend Sambo Chau, who is a software developer designing and engineering a new Khmer language application for mobile devices. “I can tell you that I am impressed by Mr. Chau. What I learned from him is to persevere and to never give up on your dreams.”

Linda Sok shared that the Khmer Alumni Association’s mission is to promote the empowerment, success, and sustained engagement of alumni from Khmer student organizations as well as professionals within the Cambodian American community.

“KAA was born out of a desire to help our growing leaders. The founding board members had first met in 2011 at The Cambodian Family one evening to discuss the possible formation of an Alumni Association for Cambodians in Southern California. The momentum grew during the previous KSCC at UCLA as more and more alums were asked to participate, a first in KSCC history,” said Sok. “We achieve our mission by implementing programs that support three areas of focus: alumni networking, Khmer student organization involvement, and community support. The vision for the organization is to grow the network first statewide and then nationwide.”

One of their main goals is to help Cambodian student organizations sustain themselves. Members of KAA believe that supporting student organizations is key to ensuring that the KSC network remains strong. Maintaining a connection between former and current students definitely requires some effort on both sides, especially since alumni may not know where they fit in or how their interest will be received. Moreover, there is a lot to be learned from each other.

“One of the benefits of joining KAA is the opportunity of a mentorship program between professionals and students,” explained board member Sereywath Keng, an engineering associate for the City of Los Angeles and alumnus of CSU Poly Pomona and CSU Long Beach. “The organization gives a chance for alumni of KSC to continue to be involved in the community, and by helping to guide the next generation of successful Cambodian Americans.”

Former CSA CSUF founding president Sophie Wherrit Kien was also present to share her personal story. She wanted to re-establish the Cambodian Student Association at Cal State Fullerton but didn’t know how to begin and lacked the resources. “With membership in KAA, there is no need to reinvent the wheel. KAA has created a manual for officers of campus organizations. It can be used as a resource booklet to set up a new organization, to recruit and retain club members, and it lists ideas and activities.”

Leadership experiences such as Wherrit Kien’s are often stepping stones and confidence boosters for the real world, as students reflect on their own accomplishments and seek role models in those who came before them. In turn, networking can help professionals stay connected to the school groups they were active with, while also allowing them to share insights with current students who are looking for advice and direction in their quest for success.

Networking groups such as KAA are just one approach for fulfilling career and personal development goals in a friendly and social atmosphere; however, that should not be the extent of one’s efforts. Beyond networking, other strategies for career advancement can also be explored. Researching employment trends through the website of the federal Bureau of Labor Statistics, which provides detailed outlooks for various occupations, including salary data, will help guide those searching for a new occupation. Taking the initiative to arrange an informational interview can be more likely to lead to a job than just a random online application. It is especially useful for job seekers to make an appointment with a professional career counselor.

For those in attendance that day, the KAA Networking Social was a successful conclusion to the KSC conference and brought together Cambodian Americans who are interested in their own personal development as well as wanting to build stronger community ties.

“The event was fun. I met a lot of new people and learned some tips on how to make connections to succeed in my career,” said Michael Jimmy Oun, Program Director at YMCA and CSU Long Beach student of aeronautical engineering, as he showed off his newly-won Khmer-I-Can Vote 2012 T-shirt.

For more information about KAA, please visit http://khmeralumniassociation.org or see one the albums of more photos from the event.

Details about the group’s next event are as follows.
WHAT: Monthly Social
WHEN: Saturday, December 15th, 2012, 6 pm
WHERE: Lucky Strike Lanes, The Block (Outlets) at Orange
20 City Boulevard West # G2  Orange, CA 92868

Sophin Zoe Pruong-McCreery is a contributor for the Khmerican.com and founding co-editor of Khmericana Blog. She enjoys dawn training for marathons and balcony gardening at sunset.