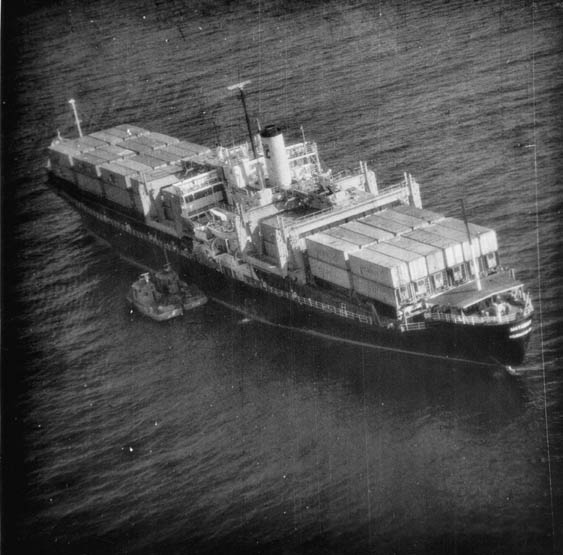 On May 12th, 1975, the merchant ship SS Mayaguez, flying under the US flag, was making its way past Poulo Wai islands in the Gulf of Siam towards Thailand. The SS Mayaguez was on a routine supply run between Hong Kong, Singapore, and Sattahip, Thailand. On that day however, things took a different turn. In the distance, a Khmer Rouge gunboat was fast approaching. Suddenly, machine guns and rocket fire shot across the bow, and Captain Charles Miller slowed the ship to a stop. Seven Khmer Rouge soldiers boarded the ship and ordered the captain towards Kompong Som on the Cambodian mainland.

The Khmer Rouge commandeering of the SS Mayaguez touched off the final battle of the Vietnam War and would be remembered as the only official engagement between US and Khmer Rouge forces, the first time live Marines were left behind during an operation. 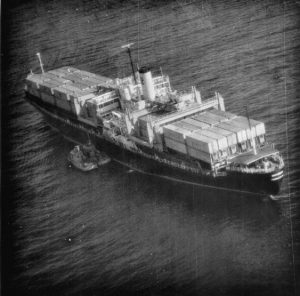 In 1972, Brad Tate was just 17, with graduation looming. A couple months before graduation, Tate received his draft number. “I got 19 or 29. It was under 100. Since I had a low number, I assumed that I’d be picked. I’d rather choose which branch to join instead of having them choose for me.” So Tate decided to meet with recruiters from the army, the Marine Corps, and the navy. From his assessment, the navy was determined to be the best fit. “It seemed to me at the ripe old age of 17 that the navy would be the best choice. I like jets, planes. At least I would be able to work around them on an aircraft carrier or something.”

In that same month, Tate signed papers to officially enlist in the United States Navy. On the morning of September 15th, 1972, Tate reported to downtown Seattle. “I turned myself in, got in there, with just a toothbrush. I don’t think I even shaved or had deodorant.”

From there, he was put on a bus along with many other enlistees, taken to the airport to be flown into San Diego. Boot camp followed the very next morning. “It was a very rude experience. Shocking. Terrifying. Stressful. Kind of like [Stanley Kubrick’s] ‘Full Metal Jacket.’ Their objective was to break you down mentally and emotionally and re-mold you into someone who can take orders and react in the moment.”

Once in the avy, Tate joined a fighter squadron, directing traffic on aircraft carriers. Tate went on several western Pacific deployments, even serving on the USS Ticonderoga during its recovery of Apollo 17. By 1975, Tate’s fighter squadron, the Mighty Shrikes [VFA-94], was attached to the USS Coral Sea. The Coral Sea was the closest carrier to the USS Pueblo when it was seized by North Korean forces and the American crewmembers were taken ashore and tortured for a year before being released. Tate spoke with Marines returning from the front lines of the Mayaguez incident and compared their experiences to his own with the Pueblo.

Following the Khmer Rouge takeover of the SS Mayaguez, barely a month after the fall of Saigon, the Ford administration felt obligated to react militarily instead of seeking diplomacy as a first option. One objective among others was to prevent the crew of the SS Mayaguez from setting foot on the Cambodian mainland in order to avoid a repeat of the USS Pueblo incident.

The Ford administration, facing low approval ratings due to several factors—a weak economy, the fallout from Watergate, strained relations with Congress, and humiliation on the international stage following withdrawal from Vietnam—saw this as an opportunity to accomplish two goals simultaneously.

Recollecting the Mayaguez situation, Tate recalls that it was the most intense fighting period or time out to sea.“Usually, we only spent 15 to 25 days out at sea launching sorties. We didn’t even know we were going to be a part of it [the Mayaguez incident.] On this particular mission, we were out to sea for 54 days.”

Two days after the Mayaguez was boarded, the green light was given for an assault on Koh Tang island, and the captured SS Mayaguez, in order to save its crew and create a buffer against any impending Khmer Rouge response.

“We were dropping napalm all over the place. From the ship, it was really bright, and after each drop, the brightness would last several minutes, like it was daytime. Launch and recover, launch and recover.” Tate’s fighter squadron was tasked with bombing the Cambodian port of Kompong Som (not the first such campaign) in addition to any strategic installations that would hinder a Cambodian military response, including airfields and naval bases. “We flew sorties for two straight days, no sleep. I remember sleeping standing up, taking 10-minute power naps. I got blown off the deck a few times.”

By May 15th, President Ford announced on national television that the crew of the SS Mayaguez had been rescued. Immediately following, polls showed his approval ratings jump by as much as 10 percentage points. The administration hailed the mission a success and a rebuke to those in the international arena that wondered if American might was waning. Yet as the dust settled, conflicting stories began to emerge.

Billed as an intelligence disaster by many analysts and scholars that have since studied it, the Mayaguez incident cost the American 15 lives. Unbeknownst to the Marines, the crew of the Mayaguez had already been released prior to the invasion of Koh Tang. A CBS special report uncovered that as early as two days before the assault, the Ford administration was aware that the island could be armed with as many as 300 Khmer Rouge soldiers. However, that information never made it to the troops on the ground. The Marines were sent in believing that there were several dozen “pirates” on the island.

“From seeing these poor Marine kids after they just got back, they were scared out their minds. That’s what I remember,” said Tate. “They had just got back from being shot at, and some of them, their buddies were left behind. That’s what pissed me off. We don’t do that. We don’t leave guys behind.”

During the evacuation of the island, three Marines, Lance Corporal Joseph Hargrove, PFC Gary Hall, and PVT Danny Marshall were left behind.

Tate also described Marines beginning to arrive back on the USS Coral Sea and what he was told by the returning personnel, including the chaos of the retreat. “This one Marine told me they were dropping rope from a helicopter so that troops could climb on top of some type of temple or steeple because it was too dangerous to land. He says, ‘My brother is trying to knock my ass off to get to the rope first.’ There was terror in their eyes. They were just stiff, leaning against the wall on one knee, frozen. Some wouldn’t even speak. I was 20 at the time. These guys looked like they were a couple years younger than me.”

At the time, Tate didn’t realize the significance and the controversy surrounding the operation. Years passed, and by 1993, Tate had become a history teacher at Decatur High School in Federal Way, Washington. “When I started teaching, I really found out about what happened. We screwed up, but mission accomplished.”

As a little-known chapter in history of Cambodia-US relations, the Mayaguez incident is another example of the ravages of war and their moral repercussions—one worth remembering especially now, on the 38th anniversary of its occurrence.