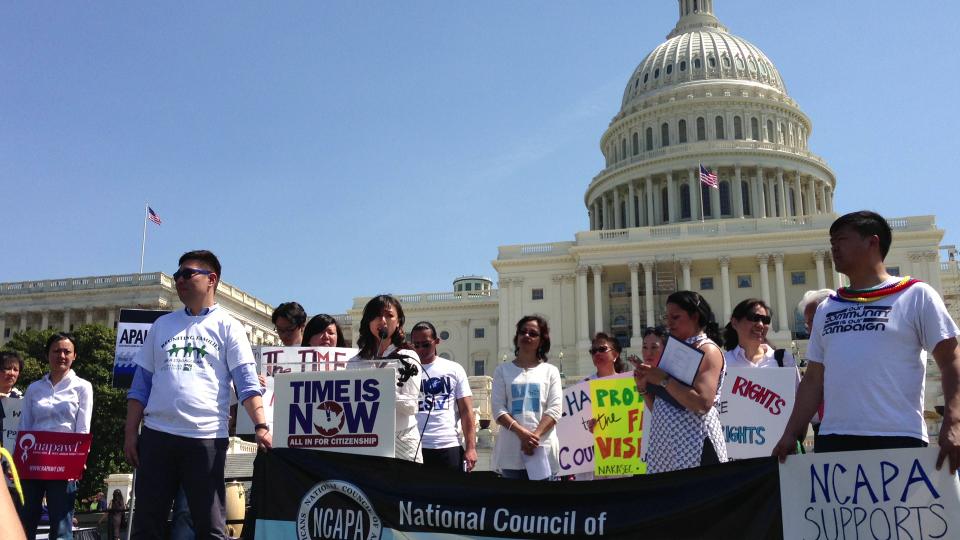 After the presidential election last fall, this year is shaping up to be a turning point for immigration reform. A bipartisan group of senators known as the “Gang of Eight,” four Republicans and four Democrats, has released a framework for addressing the situation of millions of undocumented immigrants. As a major part of his domestic policy, President Barack Obama pledged to engage immigration along the same lines, proposing a pathway to permanent residency that would necessitate that immigrants learn English, learn US history, and pay back taxes, among other conditions.

While these latest proposals and most Americans’ view the issue through the lens of US-Mexico relations, other affected communities, including Southeast Asians, remain in the shadows. “Comprehensive Immigration Reform needs to be truly comprehensive, and many community groups are concerned that the current platforms do not fully consider the struggles of all communities and families,” said Mia-Lia Kiernan, co-founder of immigrant rights group 1Love Movement.

Southeast Asian communities that began arriving en masse during the 1980s from decades of war have found themselves victims of a less than effective immigrant relocation system, and worse, laws that actually punish them for their status. The main experience of immigration and deportation in Cambodian American communities is a result of two laws passed in 1996, known as the Illegal Immigration Reform and Immigrant Responsibility Act (IIRIRA) and the Antiterrorism and Effective Death Penalty Act (AEDPA).

In 1996, the Clinton Administration signed into law both these sweeping overhauls of the immigration system, which have detrimentally affected immigrant communities by broadening the definition of deportable offenses. The legislation also eliminated judicial discretion, a judge’s ability to consider extenuating factors, such as whether the deportation would disrupt a family, time spent in criminal rehabilitation, and so forth. Deportable offenses can range from violent crimes on one end of the spectrum to misdemeanors such as shop lifiting. Another key feature of the laws is its retroactive reach, meaning that convictions for sentences that were already served are also grounds for deportation.

According to a 2010 case study by the Leitner Center at Fordham University, as a result of the law, there had been 87,000 legal permanent residents deported, 212 of whom were to Cambodia. In that same year, the Obama administration continued to aggressively pursue deportations, with a target of 400,000 individuals.

While driving home from a camping trip in 2000, Sokha Sun, a Seattle resident, was pulled over, and a firearm was found in his possession. Subsequently, Sun decided to take a plea bargain in which he was to serve one year in prison. Sun’s conviction under the 1996 law meant that he was eligible for deportation but since Cambodia and the U.S. didn’t have an repatriation agreement, Sun was counseled to take a plea. A year later that would change. “We had no idea what he was doing and neither did he, he did it on his own. Regardless, we didn’t know that he was in danger of being deported.” said Stephen Reilly, brother-in-law of Sun.

In 2002, the US signed a repatriation treaty with Cambodia, and Sun’s world was turned upside down. Because of the agreement, the US had the power (as a result of the 1996 laws) to send back Cambodians who had not become naturalized US citizens.

“We tried everything, looked for any reason to be able to stay including political asylum. That didn’t work because there wasn’t an imminent threat to our family and we couldn’t prove that he was going to be persecuted,”

Aptolos Lim, an ethnic Cham Cambodian American, also faced deportation in similar circumstances. In 1993, Lim was charged with possession of a firearm, for which he pled guilty and served time in the state of Washington. Then in 1997, during a trip to Canada, Lim and friends were stopped and questioned at the border. Lim’s record surfaced, and he was subsequently turned over to US Border Patrol, who contacted INS.

Hours later, he would arrive in an INS facility before spending the next 6 months in detention, without any information or legal representation. Reflecting on his situation, Lim said, “How would I have known that it would affect my immigration status? Had I known, I would’ve not pleaded guilty. I assumed I had the rights of a normal citizen.”

Sokha Sun’s story gained special attention at a local level. His brother-in-law, Stephen Reilly, and his sister, Niki Sun, leveraged all their resources and contacts and were able to promote an immigration rally to spotlight the deportation of Cambodians in the Seattle area.

“I reached out to my father and got with other local leaders of prominence. There was a a good amount of people that showed up, and we decided to march in the heart of White Center. Then, a local reporter approached Niki and I for an interview,” Reilly recalled. Next came an article by the Seattle Times, which gave them even more exposure, and soon, a lawyer agreed to represent them free of charge. “Eventually, we went in front of the Washington State Clemency Board for a pardon and won,” said Reilly. The conviction was expunged, therefore, Sun was no longer eligible for deportation.

Lundy Khoy, under counsel similiar to Aptolos Lim, plead guilty in 2000 for possession and intent to distribute of the drug commonly known as ecstasy. She served 30 days of a five-year sentence before being put on probation due to good behavior. At the end of her probationary sentencing, Khoy was picked up and held by INS for nine months. Since then, Khoy has had routine check ins with ICE. Despite serving her time, rehabilitating herself, and actively volunteering in charity work, ICE assigned her to the Intensive Supervision Appearance Program, with deportation imminent. Khoy’s story gained national attention following her petition on Change.org during the summer of 2012. Since then, other media outlets have also taken notice and helped push her story to greater awareness.

Other permanent residents facing deportation have not had as much luck with increasing their visibility. “This stops me from thinking about having a family. The uncertainty kills me. They treat us like second-class citizens after they bombed our country,” said Lim. His monthly visits to ICE officials have dwindled to once every six months. “I pay my taxes, but I can’t even renew my green card. I hope Obama has something for me. I know this reform is more for illegal immigrants, but what about us refugees who were deemed permanent residents?”

Documents released thus far from “The Gang of Eight” and the Obama administration have yet to reveal anything outside the US/Latin America narrative. “At this time it’s hard to say what impact might be as we we don’t know the full details of the proposed.” said Sopath Chou of Chou Law Offices who specializes in immigration law.

While the federal government begins to work on comprehensive immigration reform, many immigrant rights organizations such as 1Love Movement have taken it unto themselves to advocate for broader initiatives within the proposed Comprehensive Immigration Reform (CIR). “The current national platform on CIR does not include the struggles of Southeast Asian communities. Therefore, we decided to release our own platform on CIR that acknowledges the experience and political analysis of our communities,” said Mia-lia Kiernan.

Khoy, a former George Mason University student, told her story this week in front of the National Rally for Citizenship in Washington, DC as part of the annual National Week of Action for Citizenship. Participants in the rally include DC Mayor Vincent Gray, US Rep. Luis Gutierrez of Illinois, US Rep. Judy Chu of California, Mary Kay Henry of SEIU, Ben Jealous of the NAACP, 1Love Movement as well as many other important civil rights and labor groups.

1Love movement released its own points on CIR this week. The document is endorsed by over a dozen Southeast Asian community groups from around the country. Kiernan hopes that this statement will give Southeast Asians a place in the national debate that “doesn’t force us to compromise our integrity and is true to the demands and experiences of Southeast Asian refugee communities.”