The National Association for the Education and Advancement of Cambodian, Laotian, and Vietnamese Americans (NAFEA) held its annual national conference at California State University, Long Beach (CSULB) on October 7th and 8th.

LONG BEACH, CA — The National Association for the Education and Advancement of Cambodian, Laotian, and Vietnamese Americans (NAFEA) held its annual national conference at California State University, Long Beach (CSULB) on October 7th and 8th. The gathering was an opportunity for educators, community leaders, and other interested parties to share their various endeavors while focusing on the future of Southeast Asian American students in the new education era. 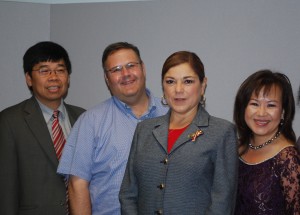 Dr. Channy Sak-Humphry, president of NAFEA and associate professor at the University of Hawaii, Manoa, led the organizers of the conference. In a letter of welcome, she called upon those attending to unite in a “communication network [that] will help build and reinforce the best quality education for our generation and future generations.” Indeed, sessions during the two days addressed a variety of relevant issues, such as funding sources for language education, policy recommendations, and even Cambodian-specific discussions–a forum specifically devoted to Cambodian issues/advocacy and an account of the process of achieving the official Cambodia Town designation just a few miles away from the conference site.

Sitting in during the Cambodian advocacy forum, titled “One Message, Many Voices: Strategizing for More Effective Community Advocacy,” offered a lively conversation concerning topics education-related and beyond. The forum moderators were an accomplished set of Khmer professionals: Dr. Khatharya Um of UC Berkeley, Bouy Te of the National Education Association, Dr. Connie Mom Chhing of Clark County, Washington’s Department of Community Services, and Dr. Vichet Chhuon of the University of Minnesota.

Dr. Khatharya opened the forum by introducing the nascent National Cambodian American Organization (NCAO), which she explained as an effort to increase Khmer representation and visibility in policy-making and other settings of influence. At the same time, she said, NCAO was formed out of frustration at the compartmentalization of so many efforts to better the community, which in isolation cannot be as effective. Dr. Chhing continued by inviting those present to speak out about issues that NCAO might take up, and the voices in the room did not fail to raise many resonant points.United Cambodian Community, Khmer Girls in Action, The Cambodian Family, Cambodia Town, and Pacific Asian Counseling Services were some of the local organizations represented, while the out-of-state representation included Seattle, San Antonio, and Washington,DC.

Among the litany of suggested issues:

The challenge, as the forum’s title alluded to, was to find a coherent message from this long list and determine what concrete actions could be taken next in support of that message. The two-hour session adjourned with the promise to continue the conversation through correspondence, and many business cards were warmly exchanged. One of the attendees was Sophea Seng, a master’s student in Asian studies at CSULB, who said, “I think the discussion facilitated by Dr. Um was really helpful. I hadn’t thought about all the different levels of activism, from community grassroots to the social research in universities, and how these could be better centralized.”

Participating in the forum was a mix of academics, representatives of local community organizations, undergraduate and graduate students, and members of the general public, a cross-section that mirrored the demographics of the conference as a whole. Although it was clear that there remains much work to be done, all seemed to come away with a genuine appreciation for the event and the discussions it had generated.

“I wanted to attend the NAFEA conference this year to listen and try to better understand people in my community, advocates, and professionals from all different fields [in terms of] what they feel are profound issues affecting Southeast Asian and Asian Pacific Islander Americans communities today,” said Darlene Ly, a CSULB student in the school counseling master’s program. “I gained a greater sense of hope for the Cambodian American community walking into this conference than I had otherwise.”

___
Eric Chuk attended the conference also to present a talk about Khmerican.com titled “Giving Voice to an Immigrant Community: The Importance of and Need for a National Media Outlet.”