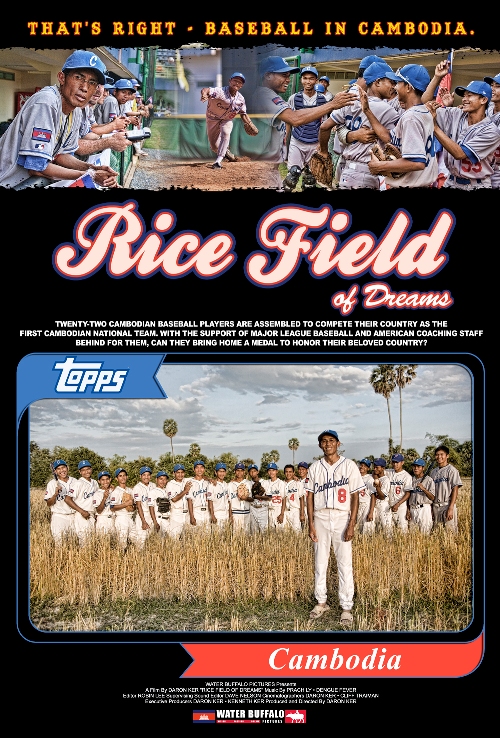 Home base is where the heart is

In the movie “Field of Dreams,” Ray Kinsella (Kevin Costner) heard voices telling him to build something grand. Now, in the documentary film “Rice Field of Dreams,” Joe Cook also heard voices—or, more appropriately, a calling—his calling for something great. Armed with only a vision and undaunted determination, he was ready to step up to the plate. 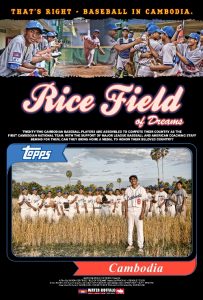 “Rice Field of Dreams,” by Khmer filmmaker Daron Ker, follows the journey of Joe Cook, a Cambodian American residing in Dothan, Alabama, as he sets off to bring America’s pastime to present day Cambodia. Joining him on this monumental mission is a team of Americans, Phil Beaudoin, Cory Beaudoin, Joe Truesdale and Mike Griffin, who make up the coaching staff. They soon find themselves in a countryside village, greeted by water buffaloes, rice fields and hugely smiling faces eager to play some baseball. However, the task of preparing a bush league for the big league was not as easy as expected. After suffering a series of setbacks and losses, we start to see facades unravel, exposing an underlying issue that has persisted over the years.

Similar to “Field of Dreams,” Ker’s project conveys the sense that to find peace of mind, one must reconnect with and face the ghost of our past. And as if a prerequisite (in terms of Khmer-oriented films) the audience is reminded, at the onset, of the Khmer Rouge regime. A montage of victims’ photos flashes and Khmer old-time rock music resounds through the theater, and an emotional connection is made immediately. It’s this emotional chord that really hits home. This is made evident when Cook, after losing a frustrating game and questioning the method of the other coaching staff, gave an uncomfortable soliloquy, proclaiming with tears, “This is not just a game to us. This is all we have…” To call that scene chilling is an understatement. More importantly, this plot point gives us a glimpse of the fragile psyche of the Cambodian people and the effects of trauma still seeping through the cracked foundation of society there. Furthermore, the games lost opened up another important theme of the movie: contrast.

Whether intending to or not, the film examines the contrast between American ideals about competitive athletics and Cambodian identity/systems. The music selection, a mix of modern hip-hop sound and classic Khmer rock from the 1960s, perfectly reinforces that particular theme of the film. The best example is when we observe the differing coaching approaches between Cook and the rest of the coaching staff. Cook, favoring a rather unforgiving, disciplinarian attitude toward coaching, often disagreed with the others’ more encouragement-based approach emphasizing good sportsmanship and recognition of efforts no matter what the outcome.

This theme contributes to the depth of the film as Ker brilliantly presented views and perspectives without insulting either side. Which coaching style was right and which was wrong? Was Joe Cook too aggressive? Was the coaching team too soft? Ker has proposed another possible view: What if neither was wrong? What if our perspective of what’s right or what’s wrong doesn’t apply all the time due to certain variables—indeed, cultural variables, beliefs and tradition. And that’s what Ker accomplished with this film. He does this by pivoting between the realities on the ground in Cambodia and American expectations, all the while exploring the differences of both sides.

The one problem I had with the documentary, however, was the lack of focus on the actual baseball players. With so much of the attention on the conflict between Cook and his fellow coaches, there is little characterization of the players for the audience to actually connect with them. In fact, one of the more endearing scenes in the film was of the players posing like proud military soldiers going to war in their new baseball uniforms, taking pictures with their parents, who had proud smile on their faces. A proper light on the players while they were learning the game would have given the film more dimensions, but instead, their participation was shadowed by the internal conflict among the coaches, making the players seem second-string.

Ultimately, “Rice Field of Dreams” was an emotionally-charged meditation on perspective and the ambiguity of what’s right and what’s wrong, what’s appropriate and what’s inappropriate—especially when considering cultural upbringing and history. Upon hearing the theater audience laugh and cry, and even speak back to the screen, you know a real impression has been made, and if home is where the heart is, this movie hit one out of the park.

—
Watch the official trailer at Vimeo.