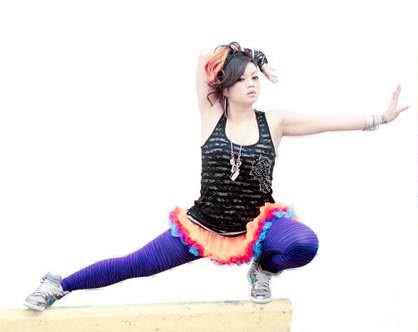 Although many people view dance as a hobby or even energetic stress relief, Thai Long has gone far to express this art form as a passion in her life. Despite her stage name of “Thai Long,” she was actually born Esther Long to Cambodian-Vietnamese parents in 1987, in Thailand, and arrived in the United States at the tender age of 8 months.

Prior to her current residence in Atlanta, Long was raised in Cranston, Rhode Island, where she experienced most of her childhood and where her love of dance developed. She recalled her earliest memories of dancing since she was 3 years old. “I remember when my sisters would put on music, I started doing the running man like it was the best dance [move] in the world, and I used to do some twirl-and-drop move,” said Long. Thereafter, throughout her teen years, she would choreograph and perform at school talent shows.

However, her first major gig was performing live at the halftime show for the Harlem Globe Trotters, with a group called “Urban Prophecy.” Next, Long landed her first professional performance in Atlanta doing a Michael Jackson commercial.

Realizing that there was a lack of representation of Asian women in hip hop, she decided to take dancing even more seriously, but felt the true inspiration to pursue it came from home. “There [are many] people that have inspired me to dance, so I can’t really specify anyone in particular. It’s like, one person helped me to build my confidence, another helped me to build my skills, and another helped me to learn the business side of dancing,” Long adds. “I’ll say Rhode Island inspired me because it’s so little, [and] I’ve always wanted it to ‘get on the map’ and credited.”

After gaining some experience in the dance business, Long decided to move to Atlanta right after graduating from the University of Rhode Island in 2010. In spite of having danced for 8 years, she still felt that she had to be pragmatic about her choice after migrating to the South. “I knew I was going up against some really great dancers and I was no longer a fish in a pond, but a fish in the sea,” she said.

Even though she initially had some reservations about the move, it didn’t keep her increasing her skills. Besides hip hop, Long has a repertoire of dance styles that grew to include crump, breakdancing, hula dancing, bachata, merengue, salsa, and of course some Cambodian dances. However, she admits that she isn’t too familiar with the traditional or ceremonial ballet of Cambodia since she never had a chance to learn it.

Some past projects she has completed include video reels for Mike Peele, Kayo Faison, and Beejay Harris (from Jungle Boogie) and collaboration with Kiki Ely, who is a choreographer and dancer for R&B singer Ciara, for the 125th anniversary of Coca-Cola. With versatile dance styles and some seasoned talent, Long was signed to Bloc South Dance Agency in January of this year. Currently, she performs with a group called “Empire Dance.” In addition, Long described her recent and upcoming projects. “I also just got done with the Three Stooges movie coming out in 2011. Right now, I’m working on the ‘Light Up the World Parade,’ back-up dancing for a female group called ‘IDK,’ and I’m doing different live performances with [Empire Dance] to better my skills.”

Most recently, Long was featured in BET’s reality TV dance competition, “Born to Dance: Laurieann Gibson.” She made it into the top 35 out of the 500 hopefuls who had originally auditioned in Atlanta. Regardless of the competition results, Long remained positive about her passion and shared some advice for those who aspire to do something they love. “Never give up on anything you love doing! There are always going to be speed bumps, but you got to just keep on pushing forward,” she continued. “Things aren’t going to [be] given to you, you have to go and get it [yourself].” As for her ultimate goal in her professional life, she concluded, “I want to be able to have an impact on peoples’ lives—have them see a piece that I have choreographed and/or performed and have them be in awe.”

Long’s next performance will be at the Atlanta Falcon’s halftime show at the Georgia Dome on September 18th.

For more information on Thai Long or Empire Dance Crew, please visit their Facebook page or their Twitter accounts, @Thai_Boogie and @Empiredancecrew.

Check out Thai Long performing in the ‘ Just A Shot‘ dance scene.